0
£0.00
11 September 2021 0 By Bambam
Climate change is causing ‘catastrophic harm to health’ and action to tackle it cannot be put off because of Covid, medical journals warn

This is nonsense on stilts. Warm weather is good for you. Winter is the season of dying. And the claims about disasters also range between exaggerated and false. For instance, the claim that agriculture is suffering is the reverse of the truth. Almost every year grain crops are in glut

‘Health is already being harmed by global temperature increases and the destruction of the natural world,’ read an editorial published in more than 220 leading journals ahead of the Cop26 climate summit in November.

Since the pre-industrial era, temperatures have risen around 1.1 degrees Celsius (34 degrees Fahrenheit).

The editorial, written by the editors-in-chief of over a dozen journals including the Lancet, the East African Medical Journal, Brazil’s Revista de Saude Publica and the International Nursing Review, said this had caused a plethora of health problems.

‘In the past 20 years, heat-related mortality among people older than 65 years has increased by more than 50 percent,’ it read.

It also pointed to the decline in agricultural production, ‘hampering efforts to reduce undernutrition.’

These effects, which hit those most vulnerable like minorities, children and poorer communities hardest, are just the beginning, it warned.

As things stand, global warming could reach +1.5C on pre-industrial levels around 2030, according to the UN’s Intergovernmental Panel on Climate Change.

And that, along with the continued loss of biodiversity, ‘risk catastrophic harm to health that will be impossible to reverse,’ the editorial warned.

‘Despite the world’s necessary preoccupation with Covid-19, we cannot wait for the pandemic to pass to rapidly reduce emissions.’

In a statement ahead of the publication of the editorial, World Health Organization chief Tedros Adhanom Ghebreyesus said: ‘The risks posed by climate change could dwarf those of any single disease.’

‘The Covid-19 pandemic will end, but there is no vaccine for the climate crisis.

‘Every action taken to limit emissions and warming brings us closer to a healthier and safer future.’

The editorial pointed out that many governments met the threat of Covid-19 with ‘unprecedented funding’ and called for ‘a similar emergency response’ to the environmental crisis, highlighting the benefits.

The authors also said ‘governments must make fundamental changes to how our societies and economies are organised and how we live.’

This is another fairy tale to scare the kids which comes around once a year without fail:

The number of weather-related disasters to hit the world has increased five-fold over the past 50 years, says the World Meteorological Organization.

However, the number of deaths because of the greater number of storms, floods and droughts has fallen sharply.

Scientists say that climate change, more extreme weather and better reporting are behind the rise in these extreme events. 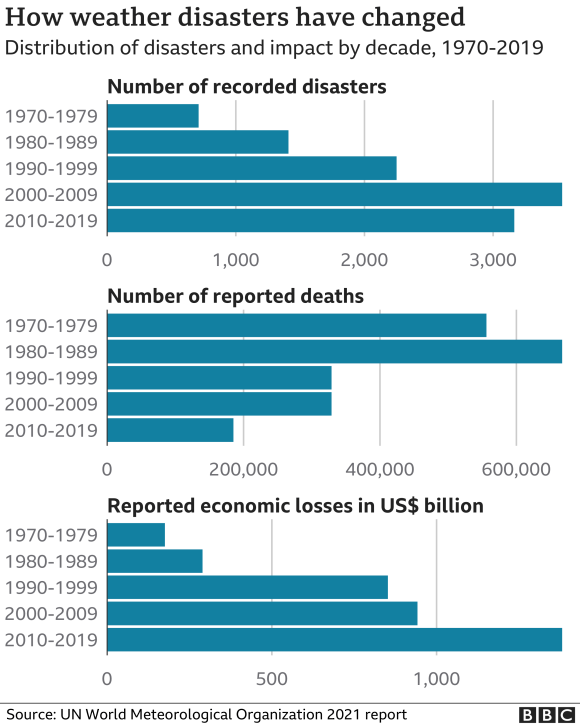 In fact, according to the BBC’s own chart, the number of disasters has declined in the last decade, hardly supporting their story.

But why do disasters seem much more common now than in the 1970s, when even the IPCC says there is no evidence that weather is getting more extreme? Simple- better reporting systems mean that we record weather events now that would have been missed in the past.

We have, of course, been down this road before! The WMO data comes from Centre for Research on the Epidemiology of Disasters (CRED) database EM-DAT. CRED, who only began publishing data in 1998, themselves warned in 2004 that earlier data was incomplete:

Despite this warning, false claims that weather disasters are on the increase keep being made. Last year, it was the UN, and the before it was the left wing IPPR. And as surely as night follows day, their claims are faithfully trumpeted by the BBC and the rest of the gullible media.

Spirits must have been high as the Governor of Minnesota took the long drive from St. Paul to Alexandria. The weather was perfect, clear cool skies. A glorious day for a picnic on the banks of a picturesque Minnesota lake. It’s fair to assume that the staff expected a warm welcome at the Democrat gathering.

What they got was a taste of just how radicalized their party has actually become.

The Governor was beaming as he took the podium, prepared to rally the loyal troops. Minutes later he was driven from the stage. Mr. Walz was confronted by a squadron of Leftists, convinced that what they had to say was far more important than anything he had to contribute.

So they shouted him down.

Most of the state’s media missed the episode. Fortunately, Alpha News shared the story along with a video which you can see here.

Regardless of your view of this Governor or his policies, it was a shameful display of disrespect, not just of him but of the Office of Governor. The encounter illustrated several things that warrant consideration.

First, the Democrat Party much like Afghanistan, has become a collection of angry tribes. The Left seems to take a clue from the Taliban, there is no room for tolerance or even debate. Anyone who disagrees must be destroyed. The Governor’s sin was that he finally bowed to the facts and agreed to allow the rebuild of an aging pipeline. Now he is a “Climate Denier” in their eyes. He must be run out of town. And that’s just what they did.

The Governor received no slack from these environmental jihadists for recently announcing (foolishly) that Minnesota would follow California’s lead and require half of all vehicles sold in the state be electric within nine years. These “protesters” are perpetually angry. That’s why we should call them the angry Left. They will never be happy, no matter how many times we capitulate.

This is especially so when it comes to “saving the planet.” If you’ve never been taught the golden rule, the Ten Commandments let alone the concept of Minnesota Nice in school, it affects your behavior. You apparently believe you can be as rude and crude as you like. There are no legal or eternal consequences. If your mother is the Earth and that’s all there is, you must do everything to save her. That includes spreading disinformation and half truths about anyone who questions your science. In their world, ends justify the means.

And nothing is ever enough. Even if we all moved back into caves, they would demand meatless Monday’s and fireless Friday’s.

Shouting down a Governor, who has supported their looney agenda 95% of the time, wasn’t just a good idea and morally acceptable. In their eyes it was absolutely essential. With the militant Left it’s my way or the highway. Sadly, the Governor chose the highway.

Throughout history bullies have understood the power of intimidation. Watching the video of the encounter one is struck by the reaction of the others in attendance. Presumably they were there because they wanted to hear and see their Governor. Yet none of the more than 200 people did much of anything to make the jihadists sit down and behave.

Once the Governor and his security detail decided to surrender, they did so in haste. It looked a little like Biden’s withdrawal from Afghanistan. The retreat came quickly with little forethought or planning. Loyalists you’re on your own, we’re outa here! They piled him into that big SUV (carbon be damned) and back to St. Paul they raced.

The worst thing about the whole ugly incident is that the radical environmentalists achieved their objective. The Governor’s unwillingness to stand his ground and make them behave like human beings will only wet their appetite. Expect more confrontations down the road.

There can be no Minnesota Nice when you’re dealing with bullies who behave like jihadists. Surrender buys peace at a heavy price. Putting on your big boy pants and staring them down is the only answer.

The federal government has hit back at a senior United Nations official’s call for Australia to accept coal’s days are numbered.

Selwin Hart, the UN’s assistant secretary-general and special adviser on climate action, told the ANU’s Crawford Leadership Forum the phasing out of coal is a prerequisite of limiting global warming to 1.5C.

“If the world does not rapidly phase out coal, climate change will wreak havoc right across the Australian economy: from agriculture to tourism, and right across the services sector,” he said.

But he said coal workers and their communities were entitled to a “just transition” to new jobs.

“The future of this crucial industry will be decided by the Australian government, not a foreign body that wants to shut it down costing thousands of jobs and billions of export dollars for our economy,” Mr Pitt said on Monday.

He noted in the three months to July, coal exports soared to $12.5 billion – a 26 per cent increase on the previous quarter.

But while it was Australia’s second largest export, the nation accounted for six per cent of the world’s total annual production behind China, India and Indonesia.

“Coal will continue to generate billions of dollars in royalties and taxes for state and federal governments, and directly employ over 50,000 Australians.”

Labor leader Anthony Albanese said the market was leading the energy industry away from coal-fired power toward cheaper renewables.

“This is an opportunity for Australia,” he said.

Mr Hart said the region was looking to Australia for leadership, especially on the target of net zero emissions by 2050.

Prime Minister Scott Morrison has said it is the government’s “preference” to get to net zero by mid-century, but has not formally committed to it.

“National governments responsible for 73 per cent of global emissions have now committed to net zero by mid-century, and we urge Australia to join them as a matter of urgency,” Mr Hart said.

All countries have been encouraged by the UN to submit enhanced “nationally determined contributions” – or NDCs – before COP26 climate summit in Glasgow in November.

A spokewoman for Emissions Reduction Minister Angus Taylor said Australia had a strong 2030 target and a clear plan to meet and beat it.

British high commissioner Victoria Treadell said a higher level of ambition for the 2030 and 2050 targets was needed from all countries.

“We are very much hoping we will see that new level of ambition and I know it is something your prime minister is looking at, working hard to try to find a position in time for Glasgow,” she told Sky News.

My other blogs. Main ones below