Who Needs Bigfoot? We Have Mystery Beasts

I know what they are, but where did they come from?

First, an orange cat. He looks a lot like Charlie, a neighbor’s cat who frequently visited people staying in the guest cabin in the early teens. Then he vanished, as semi-feral cats often do. But now there is another orange cat, presumably the source of cat tracks seen on snowy mornings. 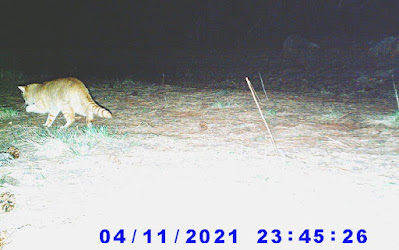 Then this yellow dog has turned up a few times this spring on a scout camera near the house. We don’t recognize him — and M. is the sort of person who walks a lot and knows the local dogs better than she knows their owners. But I can’t believe he is living on his own. 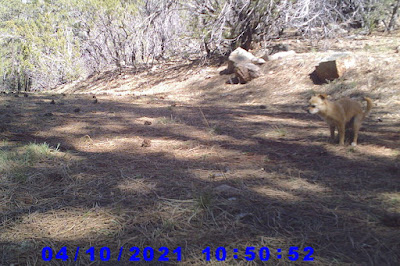 Another camera, which was set to video, picked up some visiting black dogs — and then this, which definitely is not a dog.

That was on March 31st, between snowstorms. Obviously a pig. M reminded me that certain neighbors, who keep making inept experiments at homesteading, had two piglets last summer — once or twice they came visiting and then trotted home.

One piglet was black, she said. I don’t remember. But this one does not look like it’s trotting home. In fact, it is moving in the opposite direction in a determined manner.

I have not picked it up again on a camera since then. Is it running free? Maybe there will be a good acorn crop this year, but not for six months, so root, hog, or die.

Just something else to watch out for. Like stray tortoises.

An explanation for differing rules about dogs in the East Bay’s state and regional parks.